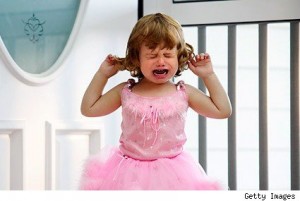 An article from Time magazine by Bonnie Rochman discusses a study from the journal “Emotion”.  The study found that the vocalizations involved in a tantrum actually follow a rhythm. Tantrums have recognizable peaks and valleys that can be analyzed in hopes of cultivating a better response from parents and teachers.  “Screaming and yelling and kicking often go together,” said study co-author Michael Potegal of the University of Minnesota. “Throwing things and pulling and pushing things tend to go together. Combinations of crying, whining, falling to the floor and seeking comfort — these also hang together.” An older theory of tantrums suggest that meltdowns begin in anger and end in sadness, but Potegal found that the two emotions were more intertwined. “The impression that tantrums have two stages is incorrect,” Potegal said. “In fact, the anger and the sadness are more or less simultaneous.”  Based on the sound recordings of kids’ breakdowns, the researchers found that sadness happens throughout a tantrum, and is punctuated by intense bouts of anger.  Potegal advises moms and dads to ignore their tantruming child, and soon enough, the fury will subside, leaving a whole bunch of sadness. That’s when parents can intervene.